Creatine Blend
5 grams - Crea-TEN consists of the 10 most effective and best-absorbed versions of Creatine:

Creatine MagnaPower® (Magnesium Creatine Chelate) – This is a trademarked version of Creatine that’s bonded to a chelated form of magnesium for improved absorption. Chelated minerals are considered one of the best forms of minerals when it comes to absorption.

Tri-Creatine Malate – This form is a combination of Creatine and Malic Acid, which also plays a role in energy metabolism. This means that this version of Creatine should result in increased muscular endurance over other versions.

Creatine Anhydrous – This is Creatine Monohydrate with all the moisture removed thereby creating a more concentrated Creatine.

Creapure® Creatine Monohydrate – This is a trademarked version of the original Creatine that started it all way back in the early 90’s, Creatine Monohydrate. This version is the most tested and proven form of Creatine on the market. To improve absorption, Creapure uses micronized Creatine particles.

Creatine Citrate – This version bonds Creatine with Citric Acid, another component of the body’s energy system that should help increase muscular endurance.

Creatine Pyruvate – One thing Crea-TEN does and does very well is take the idea of supporting the energy systems of the body and including several types of Creatine that enhance muscular energy, such as Creatine Pyruvate. This makes sense since one of the main benefits of Creatine is increased endurance.

Creatine Ethyl Ester – This is one of the first versions of Creatine that targeted the absorption problems associated with the original Monohydrate version and has since become one of the most popular forms of Creatine on the market.

Creatine Gluconate – Back in the day when Creatine was a new supplement, it was suggested to take it with a simple sugar such as fruit juice to enhance absorption. This version targets that idea by attaching Creatine to a fast-acting glucose.

Taurine – When the talk turns to cell volume, Creatine is usually the first nutrient you think of. Cell volume simply means that water is pulled into the muscles thereby increasing muscle fullness. This is also known as water-based pumps. One of the ingredients that is often paired with Creatine to enhance this process is Taurine and is included in Crea-TEN for that reason.

Betaine Anhydrous – This is a newer ingredient on the supplement marketplace that’s become increasingly common in many Creatine formulas due to Betaine’s potential to enhance muscle cell volume by pulling water into the muscles.

BioPerine® Black Pepper – This is a patented form of Black Pepper used in many supplements to enhance overall nutrient absorption.

Banaba Powder – This herb is used because it enhances the delivery of glucose to your muscles. If you recall that Creatine was originally combined with a simple sugar to improve absorption you can understand why Banaba is included here.(8)

Fenugreek Seed Extract - Fenugreek is typically thought of as a natural testosterone booster. We’re using it in our Creatine Accelerant Blend because it has also been shown to help lower levels of blood glucose thereby avoiding unwanted insulin spikes.(9) 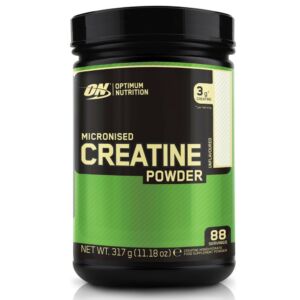